A clock based on Cistercian numerals

Let me tell you the story of when I tried Twitch for the first time to live-code a Web Component that displays numbers with Cistercian numerals, so I could build a clock like this:

Yet another side project idea §︎

Back in January 2021, I saw a tweet about Cistercian numerals. I was very intrigued. If you don't know about them, here's the introduction from the Wikipedia page:

The medieval Cistercian numerals, or "ciphers" in nineteenth-century parlance, were developed by the Cistercian monastic order in the early thirteenth century at about the time that Arabic numerals were introduced to northwestern Europe. They are more compact than Arabic or Roman numerals, with a single character able to indicate any integer from 1 to 9,999.

I really like how compact and elegant it is to display a big number with just one symbol, especially when there is some symmetry.

A few days later, I saw a tweet from Andrew Aquino saying he created a React component to display any number with Cistercian numerals. My first reaction was to tweet:

I was expecting someone to create a Web Component, so we could all have a standard compatible way to display Cistercian numbers on our websites, even if we don't use React. Instead, out of distaste for sudo, my wonderful colleague Marc-Antoine Perennou created sudo-ng. Nothing happened, so I guess I was left with yet another side project idea. Although this time, I decided to do it live with an audience.

In the pre-pandemic world, I used to give talks at conferences and share my knowledge and passion for Web development. When you code in front of hundreds of people in a conference room, everything is well-prepared and rehearsed many times. There is a kind of illusion of simplicity, but it's the best way to go straight to the point and focus on the new stuff the audience wants to learn about. The minor drawback is that people miss everything that happens in real life when you write code. You read some docs, you make mistakes, you try something, you go back, you get stuck on a silly bug...

Watching someone thinking out loud and writing code without preparation is a wonderful way to learn. You discover new IDE keyboard shortcuts. You learn about some unknown language pattern or feature. It feels a bit like pair-programming with a mentor.

Following a few fellow speakers that got into Twitch during the first lockdown, I decided to create my channel and try the platform for this side project idea.

My main goal was to create a Web Component to display a number with Cistercian numerals and then reuse it to create a clock component that displays three Cistercian numbers: hours, minutes and seconds. Bonus points if I could animate the lines of the symbols. 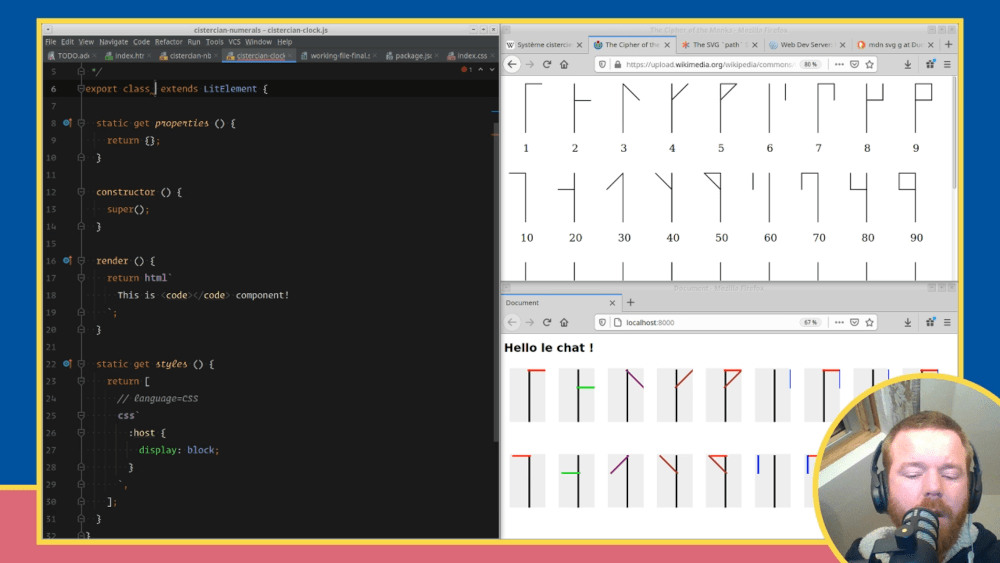 Despite those, I really enjoyed giving this session. Mistakes were made, but we finished with some kind of achievement. The clock design was a bit clunky, but it worked. It looked like this:

If I were to do it again, I would prioritize the different steps, so the progress is more linear for the audience. I would also improve the way I timebox steps, so I would stop insisting on some details. This retrospective analysis reflects the constructive feedbacks I got from audience members afterwards.

As a host, this session was really pleasant to give, and it almost didn't require any preparation. Between and people attended the stream, and some of them really helped me through the chat. Apart from the code and tips, I think I managed to share the fun I had working on this side project.

I really want to do it again with other side projects ideas. I could try more interactivity with the audience through the chat (and maybe some sounds/music). It's very different from what I'm used to with conference talks. The number of interesting information per minute is clearly not the same, but I don't think it's a problem in itself. I think it's just a different way of sharing knowledge with others. A bit slower, more interactive, less magic but definitely more authentic.

After the stream, I decided to improve the project:

A few weeks after, I added a few more features:

I published the source on GitHub at hsablonniere/cistercian-numerals if you're curious.

Because they're exposed as Web Components, you can use them in any Web project, whatever the stack/framework you're using. You can install them from npm but it's not mandatory at all.

As described in the README, you can use these components in your HTML without any npm install, without any build step or bundler. All you need is a <script> tag sourcing a modern smart CDN like jspm:

Then you'll be able to use the number component in your HTML like this:

You'll also be able to use the clock component in your HTML like this:

Because it's just HTML, it's also very easy to integrate in a Markdown document. It's exactly what I'm doing right now with this article, but you need to browse it from my site. Here's the date + time (without seconds) example:

Please see the README for more details about how to use and customize the components.

Edit this article on GitHub